HomeTechWhy Robot Baristas Might Steal Your Job In The Not So Distant...
Tech 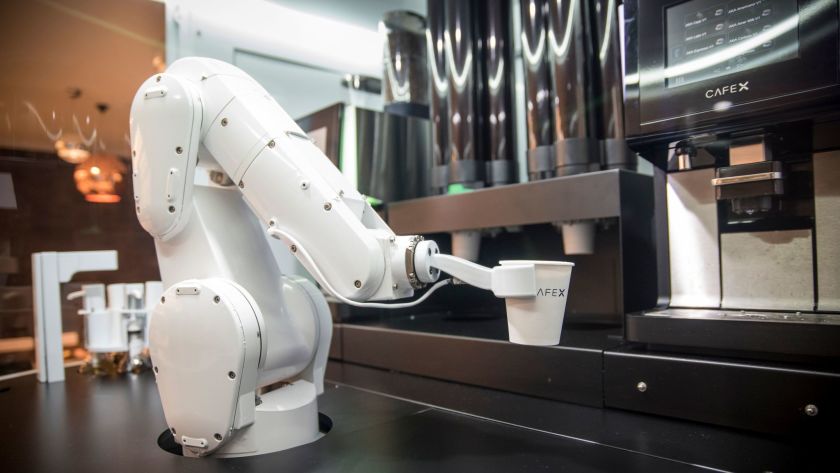 As we are entering the new decade, gadgets, robots, and new technologies are becoming more available to the public. Technologies that were considered too expensive or impractical are becoming everyday items, and in a few years, they will become the new normal. Seemingly advanced technologies like electric cars, self-repairing carbon fibers, and robot-baristas are not impractical or unique as they once were.

With robots taking over professional jobs and task-related jobs at an alarming pace, it shouldn’t come as a surprise that Baristas are in danger of losing their jobs. While it is true that some franchises brand image and business model are associated with human workers, most coffee shops don’t quite agree with that business model.

Robots are relatively cheap, easy to maintain, and produce quality coffee every time they brew a cup for a customer. There are tons of reasons why the average coffee company should consider them as a viable alternative to actual baristas- they are simply the more cost-effective solution.

If robot baristas are such a threat, why aren’t there robot coffee machines everywhere?

They technically are. Although most people don’t know it yet, robot coffee makers have been slowly filling up stores, food outlets, cafes. In fact, there are more common than you think. Each time you walk up to a vending machine that dispenses coffee, you have used robot coffee machines.

Major names in robotics like Rozum and KUKA have been created prototypes of robot-baristas that are almost as good as the real thing- Baristas. Even the American chain-coffee store Briggo has invested a sizable sum in robotic baristas in the form of brewing machines.

As of right now, there are numerous versions or types of robot baristas currently available on the market.  There are the Automated Kiosks, Barista bots, and Robo Café style robots. Most of these robot baristas won’t be in popular circulation for the next couple of years, so the threat is not as immediate. The only robot baristas you really need to worry about are the Briggos signature Automated Kiosks that are set to take over regular coffee style vending machines that offer plain coffee with a sugar or cream option. With Briggo automated kiosks, passengers will have access to a variety of options and a user interface that is customer friendly.

Being a barista is not all about making delicious espresso-based coffee; it goes far beyond that. It’s about the extra effort that you put into making each cup. It’s about the artistry, the effort, and everything else in between. While a robot-barista can technically replicate the taste, it cannot, in most cases, bring the kind of character and beauty experienced baristas bring to every single cup.

Besides, not everybody enjoys having their coffee served to them by automated robot arms. We think the true place or robots are somewhere in the middle. While they are surely sophisticated enough to replace some baristas, taking out the contribution of the barista out of the equation is not completely possible.

The average espresso lover understands how important and rare great baristas actually are. Upon first glance, making a great espresso might seem simple enough, but it actually takes a lot of time and talent to perfect the act of coffee brewing. Talented Baristas are a scarce commodity, and coffee shops understand this. That is why talented baristas are paid about $11 every hour. With a robotic robot coffee maker like the robot-barista, some businesses and cafes can finally offer their customers great tasting coffee.

The true place of the robot-barista

According to Wikipedia, coffee shops function as centers of social interaction. For some people, it’s all about the energy, the workspace, and the Wi-Fi, and not coffee. And for others, it’s about enjoying a great cup of coffee. The only problem with going to a great coffee shop for coffee is the time you have to waste waiting for a single cup. Robotic baristas can breach that gap, and provide great tasting coffee without wasting your time. The average barista, with the help of an espresso machine, could probably make 70 cups per hour if they are really experienced. On the other hand, a robotic-barista can make about a hundred cups per hour.

If you are in a rush, and you are not quite visiting your local café because you want a quick morning coffee, it would be perfectly fine to use a robotic-barista instead. They occupy as much space as a coffee shop, and they will help decongest great coffee shops in the mornings.

Why Invest in Field Service Management Software as a Commercial Contractor