Despite a pandemic slowing down certain sectors of the economy, the U.S. housing market has been surprisingly hot. Record-low mortgage rates and more flexible work conditions have continued to entice buyers who are looking for more space to work, rest and raise their families.

Real estate experts anticipate that sales will continue to rise in 2021. High buyer demand and limited supply will keep prices growing. Home prices were up at least 10% in two-thirds of the country, and while the increase may slow, it’s not going to stop. That’s great news for sellers, but buyers who have limited financial resources may be feeling like they will never have an opportunity to own a home. Fast-rising prices have created a bigger barrier to entry for younger first-time buyers who don’t have existing home equity to use for down payment savings. However, buyers who are willing and able to go the distance for their first home may find some luck in the states listed below.

In 2020, more than 16,000 people moved to North Texas from California, reported CBRE. Relocations from New York were even more significant. People living in Florida and Illinois who had the flexibility to work from anywhere also saw Texas as a more attractive place to relocate.

While Texas isn’t the cheapest state to plant roots, it is much more affordable than big cities that don’t offer much living space. In fact, housing in Texas can cost half of what it costs in California. In Austin, for example, you can probably find your dream home, or something very similar to it, for $300,000 or less. The economy is vibrant enough to support young and middle-aged adults who are not yet in the prime of their careers, making it a viable option for people who are ready to leave their hectic metropolitan lifestyles behind.

Mississippi has a population hovering around 3 million, beautiful outdoor attractions, and a median house value of about $131,774. The cost of living in Mississippi is about 15% lower than the national average. 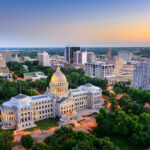 Land availability, low housing prices and access to the Gulf and highways for shipping make Mississippi one of the least expensive places to live in the U.S. That being said, the median income is also lower.  Agriculture remains the most active and significant sector, but healthcare job opportunities are growing in the state.

Pennsylvania boasts a low cost of living, and a very low-income tax. When compared to New York City, Pennsylvania’s real estate prices are about 70% lower! Young professionals are finding some career success in Pittsburgh where there is a developing startup scene.

Pennsylvania is also home to Schuylkill County, the county where people spent the lowest percent of their wages on home costs. One could get away with spending 6.3% of annualized weekly wages on their home. Schuylkill County has a population of about 141,500, which is ideal for people that enjoy a quieter way of life. Homebuyers can find something bright and beautiful for less than $200,000.

Idaho, sometimes referred to as the Gem State, has stunning natural landscapes (and real gems), but there’s more to do than take in the scenery. The Boise State Broncos football team keeps loyal fans entertained, and since Idaho doesn’t have any professional sports teams, a lot of fan energy is channeled into college athletics.

The state has been recognized as one of the best places for homeowners. Boise, for example, has a relatively low cost of living, and a growing population; young people find it to be the perfect mix of urban and suburban. Buyers can easily find a forever home for less than $500,000 in Boise, and much less in more suburban areas.

Nicknamed the Mountain State, West Virginia offers a low cost of living and breathtaking natural scenery. People who like to hike, bike, ski or fly fish are going to love West Virginia. Natural resources and tourism are two of its biggest job industries. West Virginia is also a leading energy-producing state with rich natural resources.

This state, which has a population of less than 2 million, has a median home value of roughly $108,333. Home prices are increasing (as they are everywhere), but it would be hard to find a 6-bedroom Craftsman-influenced brick home for less than $400,000 in most other places.

What Are Some Of The Things To Consider When Choosing A House Plan?

How Important Is Timing When Buying Rental Property?