Not So Late Into The Game: Path of Exile Leveling Guide 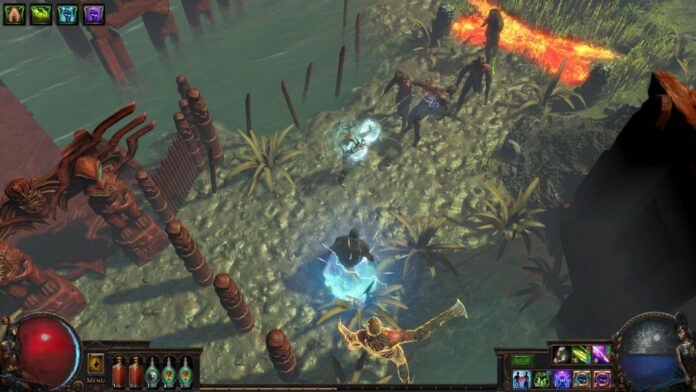 So, after many years since the game was released, you finally decided to play Path of Exile and get into the map-clearing, PoE Currency -collecting fun. That’s alright, because there’s always no better time to get started than now, especially because the next expansion, Heist, is just around the corner. To help you out, here’s our Path of Exile leveling guide.

Unless you want to go in blind and want to experience the Path of Exile game truly on your own terms and/or you want to experiment, then it’s important to read up on the particular PoE builds you’re aiming for. Trust us, if you’re really particular about getting things right, then mistakes in this game will cost you a considerable amount of time and in-game resources. And unless you’re really insistent on a blind first run, even when you’re not particularly running and gunning for a particular PoE build, it helps a lot to read up on the game’s mechanics.

One PoE Build For Now, Another for Later

If you’ve played MMOs before, especially hack-and-slash ones, then you’ll know that the fastest way to level up is usually to kill as many monsters in the shortest amount of time, and that the best way to do that is to use AoE spells. In fact, most PoE builds in the game are all about dealing AoE damage in order to clear maps as quickly as possible. That’s why for a lot of endgame build isn’t geared towards that particular mechanic, a dedicated leveling build is necessary.

On a related note, there’s an ongoing debate within the PoE community whether it’s better to have a dedicated Path of Exile leveling build or to get to the endgame build as early as possible.

Grinding In The Now Versus The Later

There are definitely pros and cons to both. With the former, you’ll be more efficient because you’re operating at the full capacity of what the available build currently allows, unlike endgame builds that require endgame gear, gems, and passive skills. However, a dedicated PoE leveling build means you’ll have to tweak almost everything once you hit the endgame. Plus, it means you’ll have to spend PoE Currency on the leveling build. Lastly, and perhaps the biggest problem to this is that you might not be a fan of the endgame build in the first place.

On the other hand, transitioning to endgame build the moment the game allows you can be quite difficult. Although you can get your Ascendancy as early as 50, there are still lots of PoE items and PoE Orbs that you won’t be able to get your hands on. That means the build has yet to be optimal. But what it lacks in delayed efficiency is more than made up by the fact that you get to save money, and know as early as possible if the build is for you or not.

Do note, however, that you shouldn’t try to get your endgame necessities too early, or else you’ll be stretching your budget and will be spending too much time trying to get them at a time when it’s hard to do so. Eventually, getting the PoE items you want and need will get easier, so don’t be overeager about “starting right and right away” because you’ll get there eventually.

Not Everything That Drops…

Last but definitely not least would be knowing which PoE items are worth keeping or not. If you really want to get to the level cap as quickly as possible, then you’ll have to save yourself the time-consuming endeavor of determining which ones will serve you later, and which ones to discard. For this, you’ll two things:

So there you have it, a general guideline on how to approach leveling up in Path of Exile. There’s so much more to learn, but with these basics, you’ll fare much better and be in the endgame faster.

FireFlex Dual Novec 1230 Clean Agent & Pre-Action Sprinkler – Why should you get it?

Top 15 Video Production Company Of 2022 For Sharing Your Message