HomeTechHow Much to invest for a Minimum Viable Product (MVP) ?
Tech

How Much to invest for a Minimum Viable Product (MVP) ? 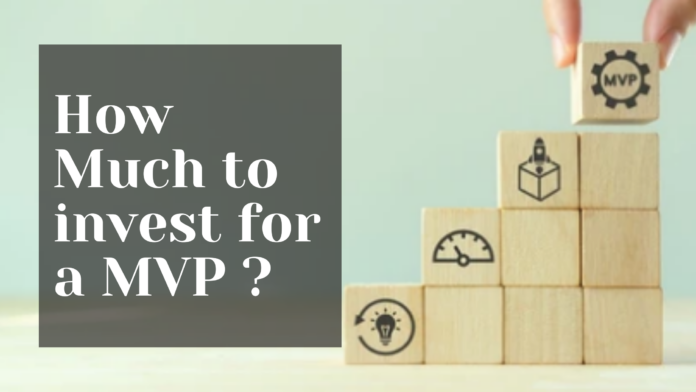 MVP, also known as Minimum Viable Product, is a process where an entrepreneur invests his time and money to build a basic structure for his startup Idea. MVP is a proven process to validate App ideas and get a proof of concept.

Once the Idea is finalized the next step is to list down all the features the application would have. Considering MVP a basic model of your Application, the product should not be interpreted as an incomplete product. The core features which complete the user flow should always be sufficed. The difference between the “need to have features” and “nice to have features” needs to be understood and based on that the final modules should be decided.

Create a Detailed Document and a wireframe of what all has been decided to finalize the scope of the work document. This will help in understanding the requirement.

Once you have the list of all the final modules the next step is to decide on the investment that would be required to develop the MVP.

There are several factors that would make a difference in the evaluation of the cost to develop an MVP.

I have listed a detailed list which can impact the overall cost.

Based on your application process the technology can vary. If the business idea is about Crypto, Blockchain is the right tech stack. If it is about automated responses, Artificial intelligence and Machine Learning with python coding might become the requirement. If it is a frontend oriented application javascript like React and Angular might be needed and so on.

With every technology, the hourly cost may vary as few stacks may cost higher based on the availability of the skilled resources.

As we now understand technology and languages can play a major role in the cost, the same way the number of platforms on which you would like to launch your app may impact the total cost. Based on the approach to acquire the end-users, the App can be launched for IOS users, Android Users, Web Users Tab Users and several other platforms. Each would require dedicated man-hours to develop the frontend. And this entire process will add-on the cost of the App.

3- Server and other third-party dependencies.

With each technology, the hosting environment may vary. And cost to design the hosting environment as per the requirement needs to be procured from a third-party. Option to set up an inhouse hosting server can be expensive. Apart from hosting, based on the application requirement, there could be several other third-party libraries which may have an additional cost, like Maps for live tracking or directions, Payment gateways, SMS packages for alerts and several others.

There are 2 categories of designs that generally entrepreneurs opt for. Basic and high end.

With the basic design, the entire application follows a general rule of color combination, fonts and a simple structure oriented towards the goal of the app. This kind of design requires less time to deploy and even a Jr. or a Mid experienced designer can make the design. It is just a matter of fulfilling the goal by providing graphical representation to the App.

With High-end design, the App is loaded with animations, concepts to make the app modules unique and focusing on the specific models of the app. Perfect fonts, spacing, padding, colors, and everything that ensure the app is a masterpiece. All in all a great design which not only suffices the purpose of the application but also ensures the end-users enjoy the app.

Once the list of features is ready and the scope of work is finalized, this needs to be estimated by the development team on how many hours it would take to develop, test and launch.

With In-house team, this can be great looking at the point where the developers are right in front of you and developing the product as you wish. This has limitations as for every stack needed on the application you would need to have a developer.

This can increase the cost of development. All the employee benefits and legal compliances need to be complied. Hiring the right talent is also a big challenge. Moreover when the product is developed the entire team would be on the bench.

Not Advised for MVP

With local agencies, regular physical meetings can be made possible, you can also hire part-time and full-time developers with specific skill sets. The hourly charges are at the higher side.

Nearshore teams are a good option. These are also software houses which are located in nearby countries having comparatively lower hourly rates of developers when compared with local agencies. Meetings can be done once or twice in the entire product journey depending on the agency policy.

Offshore developers, these developers are located at locations which have comparatively lower rates than local agencies and nearshore. Some of the locations have a huge pool of talent also like Asia and Europe. So hiring a team of developers from these locations can give you the access of high-end developers at a lower cost.

These are the major factors which affect the total cost of an MVP. The ultimate goal of an MVP is to be a cost-effective product which reduces the risk involved in raising the App Idea in the digital marketplace.

With the right strategy and approach, the cost for an MVP can be determined and controlled.