Challenges with the merge of IoT and Accountancy 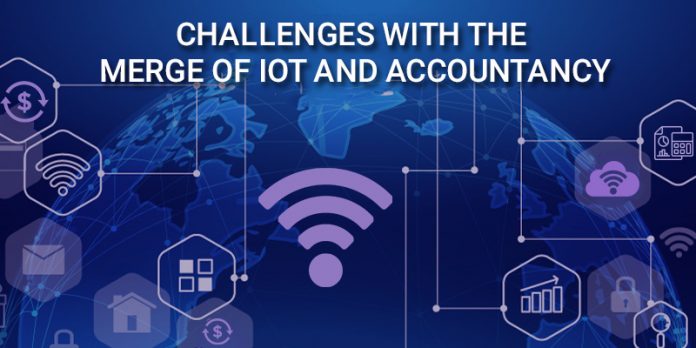 From the moment you wake up, grab your smartphone to check the emails and set your smart-geyser to take a bath, you are interacting with IoT and now that’s the world we are living in. This is a typical example to show the impact of IoT in our lives. We are surrounded by sensors transmitting terabytes of data every moment to improve our comfort and lifestyle.

IoT has the massive potential to revolutionize the finance and accounting industries. But that transformation comes with several challenges. Let’s walk through the challenges with IoT-Accountancy collaboration.

Nowadays anything connected to the internet is open to cyberattacks. So as IoT is susceptible to risks of hacking attacks which could lead to significant harm. Every new technology has always been a double-edged sword. With all the upcoming benefits, there follow some unpredictable threats. A well-known and controversial IoT-based attack was the 2016 Dyn cyberattack. The hackers used the Mirai botnet to take control of connected devices such as cameras, to launch a denial-of-service to attack the servers of Dyn which controls most of the domain name system. This attack led to significant disruption to a few popular applications like Twitter and Netflix.

So, until we do not address the dark side of upcoming concerns, we cannot create a countermeasure to protect us. Here are few of the common IoT security threats:

Several researchers and companies are working on building strong and light algorithms to protect IoT devices. Creating waterproof and fireproof IoT devices are evidence of our progress to protect against natural disasters.

Accountants have to be aware of their audit and risk management roles. They are an essential part of setting up the management system and structures needed to manage the cybersecurity risks. CFOs have to ensure security risks with IoT at a broad level. IoT investment decisions need a factor of expense while addressing security and privacy risks.

The mistake of ignoring cybersecurity while implementing any new technology in the business, not only can damage the reputation and profitability. But also it could risk the economies, political system, and lives of the people. And the accounting profession here plays a leading role by having ethical knowledge and the client’s interest.

The immense amount of collected data from IoT devices carries huge value to the business. And the IoT platforms need to pay careful attention to it. For example, with an IoT device/machine, data ownership could reside with the manufacturer of the machine, the sensors’ manufacturers of that machine, the actual owner of the machine, people providing network connectivity, the software provider or the cloud hosting company providing storage platform to the machine. Any of them can provide further access to a third party (such as data analytics companies or data marketplaces) for business. Also, regulators and governments may have legal rights to access certain types of data.

The people running the companies have to be well educated and aware of the need to establish contracts setting up data ownership and access rights to the data. Companies offering data analytics were often bound by the clauses and regulations of non-disclosure of data to any third party further. Also, to use data for only specific purposes.

Here the accountants who are involved in commercial negotiations about the use of data and valuation of associated rights will be needed to stay aware of the issues. They have to closely work with lawyers and other specialists.

The impact of constant observation and risks of Micromanagement

Surroundings impact behavior. We all probably behave differently in front of the boss and different when they are somewhere else. Constant observations seem right with few examples, such as monitoring employees working under extreme conditions, monitoring canteen for hygiene check, and nutrition level of food.

The impact of constant observation may turn into micromanagement. Also, this will create transparency among different levels. The data collected can provide honest feedback. But on the other hand, this may strike at centralized decision-making and can also demotivate employees as a constant interference. The companies need to point in between empowerment and control.

The actuators, sensors, microcomputers, connectivity approaches, IoT platforms, Operating Systems, application software, data formats, and communication protocols raise several challenges. Choosing the right product is quite difficult and various devices from different manufacturers into an effective machine or system take significant efforts. According to research by Gartner, half of the expense of implementing IoT solutions will be spent on integrating various components/devices with back-end. Technological standards in most industries are dispersed, they should tend to meet at a point.  This would help in creating common standards and framework for the IoT devices. Due to this lack in the standardization process, the interoperability of IoT devices still seems critical.

Companies most commonly raise doubts on sensors’ readings. There are no specific standards for measuring the accuracy of sensors. Even if in laboratory tests sensors show accuracy, this might not be the case infield, where operating conditions change on a higher level. Awareness and care are required here because air quality, temperature, and pressure also impact the readings.

To expand the IoT further, the development of infrastructure is required. The geographic dispersion is limited by the connectivity expense as mobile and satellite connectivity can be really expensive. Even in the area where the network exists, connections and data speed are not that reliable. Due to this drawback, completely autonomous vehicles are still not popular yet. Few remote areas still lack the power supply and using batteries and generators every time is quite hefty. The cloud and network infrastructures also have been upgraded and advanced to deal with the enormous amount of streaming data, which is a good thing but this might raise the costs soon. Organizations need to prioritize data to stay safe.

Here the trendy technology of 5G plays a vital role. It not only improves reliability and data download speeds but also has a significant role in upload speeds.  Hence, two-way communication can be highly improved by the implementation of 5G. As per Erickson’s prediction, “By 2024 potentially 65% of the global population will use 5G.”

Merging IoT with Accounting enriches the word ‘accountability’ here. The challenges are genuine, but we cannot ignore the tons of benefits provided. For accountants and CPAs, the risk to the value of accounting exists. But it could be minimized by working on combining financial information and IoT data to further develop accounting and improve decision-making. The accountant who uses their knowledge and creativity, while working on their current skills and developing new ones, can make the most out of IoT applications.

6 Effective Ways to Streamline Accounting in Your Small Business

How Does Poor Bookkeeping and Accounting Affect Your Company?